The Urban Wine Company™ was born out of an idea a few years back. Neighbours Richard and Paul were relaxing underneath a vine enjoying a glass of wine that had been flown half-way across the world. Realising they were sat in an urban garden of Eden surrounded by grape vines, they asked the impossible...
"Would it be possible to make a wine made from London grapes?"

So, in September 2009 they set about harvesting grapes grown in gardens, allotments, behind supermarkets and even at the side of railways. They teamed up with winemaking experts to produce the very first batch of 'Urban Wine'. Pleasantly surprised, if not a little amazed by its 'Drinkability' The Urban Wine Company™ was formed. Not only had a fantastic tasting wine been created using grapes grown in a city centre, something unique had also been born. 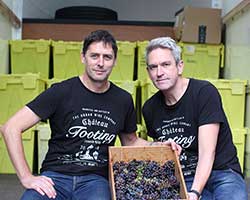 As news spread on the urban grapevine, local communities came together and joined in to produce wine.

The Urban Wine Company™ now has a proud tradition of making wine in the capital and would love others to get involved in what we do.

Pick the Join Us grape above and before you know it you too could be sat in your garden enjoying a glass of wine made from the very grapes that surround you.